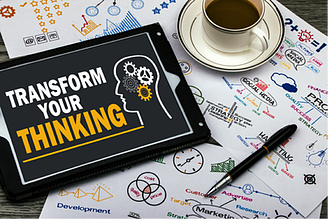 Recently I worked with two corporate directors, Steve and Gary. Both hold senior level management positions, have worked for a similar number of years and have obtained impressive degrees from notable universities. Both work hard for their organization and attain solid results. However, a while back when the company started an organizational change mandate, an interesting thing happened. Gary’s behavior began to fall short of expectations. It impacted his team and their focus, productivity and attitude. For some reason, Steve didn’t show the same behavior traits, and neither did his team. Why?

It all comes down to mindset. Mindset impacts business relationships, and ultimately the success of an organization’s culture and the bottom line. Gary works hard to show his successes. He’s very good at outlining what needs to happen, but he’s not very interested in promoting his people or making them look good. He sees the world one way and it rarely changes. Steve, on the other hand, is a natural coach who believes that he shines when his people do well. He’s happy taking a backseat to them. He doesn’t tell people what to do and instead asks questions to lead them to the best conclusion. He understands that leaders often fall short because they don’t fully understand or see the ramifications of their decisions. He’s always looking for ways to develop their perspective.

Mindset is an idea about our intelligence and talent. People with a fixed mindset, like Gary, believe that traits are given or “fixed,” and that talent alone fosters success. On the other hand, people with a growth mindset, like Steve, believe that their basic abilities are simply a launching pad for growth and development. People with growth mindsets love to learn. And, more importantly, they show resilience, which is critical to success.

Carol Dweck, Ph.D., is a world-renowned researcher in the field of motivation at Stanford University, and she developed this concept. She says:

· Intellect and talent don’t guarantee success. They stand in its way.

· Praising doesn’t foster self-esteem and accomplishment. It jeopardizes them.

· Teaching a simple concept about the brain raises productivity.

Remember Enron? Did it fall apart because of mindset paralysis? It’s possible. Many companies are driven to hire talent, because it’s seen as the secret sauce that creates success for the organization. In Enron’s case, this strategy backfired because they became myopically focused on being talented and behaving in an extraordinary manner. As a result, their fixed mindset blinded them to collaboration, innovation and external market changes.

Cultures are made up of people, and overbearing and critical leaders are instrumental to creating a closed mindset among their team members. They can force their teams into fixed mentalities that prevent learning and growth. As a result, team members will worry about being judged and about what the boss thinks, rather than customers and the marketplace.

Let’s go back to Gary for a moment. Without realizing it, he’s being an overbearing leader. It’s his operating set point. This was harder to see prior to the change because he was working in an environment that he knew how to navigate and control; one that praised his successes. Moreover, he got away with never being wrong. Now he consistently operates outside his comfort zone. His constant need to be right, to govern and control how work is accomplished and his manipulation of messages to his boss all create undue stress for his people. In his case, one of his most talented business line managers only remained in her position for two years before resigning. No matter what she did to improve the organization, she was always made to be wrong. In addition, Gary comes to work every day feeling uncomfortable and trying to force everyone else to ease his pain by playing by his rules. His people feel intimidated into supporting him while at the same time pulled by the company’s new direction.

In studies, researchers have found that people with growth mindsets make better negotiators. They’re more easily able to push beyond obstacles and to reach win-win solutions. Moreover, managers with a growth mindset are more observant about their employees’ improvement. They don’t remain stuck in an impression that can limit them, and their employees see these managers as offering better coaching and employee development.

Managers with a growth mindset, like Steve, foster a culture of coaching which, in turn, creates opportunities for insight and innovation. Steve has been an ongoing client of mine for three years. We work together to offer growth strategies that open his employees’ minds to the possibilities they’re creating in their jobs. Not all of them will become leaders, but in Steve’s eyes all of them are leaders in their sphere of influence. He manages the most productive division of the organization, and his efforts to promote and build his people have made him a valued member of the executive team.

Gary remains a valued member of the organization, but he’s tested his relationships in the company. I was asked to work with Gary, and we’re focused on changing his mindset from one that is fixed to one that’s open. To do this, he is learning how skills, abilities and talent evolve throughout life. I want him to work to his talents and practice to his weaknesses. This focuses him on the process rather than the ultimate outcome of being the best all the time. We both believe he will succeed and, because the science says it’s possible to learn a new mindset, he’s optimistic. Stay tuned.