The Brain, a Tic-Tac-Toe Chicken, and Self Awareness Insights for Leaders and Teams 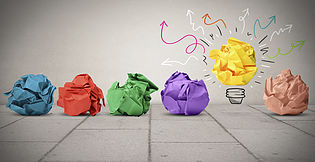 You know that feeling when you just can’t solve a problem? When I was younger, I’d force myself to focus on it until I came to a conclusion, which naturally led to a creative block and unnecessary frustration. Today I like to think I’ve wised up enough to step away from the problem and allow my mind to do a “slow simmer.” Then…Boom! The solution hits me when I least expect it. This is called the Aha Moment.

In a 2009 study, John Kounios, Jessica Fleck, Deborah Green, Lisa Payne, Jennifer Stevenson, Edward Bowden and Mark Jung-Beeman conducted a study called the origins of insight in resting-state brain activity. The researchers wanted to show the effect a resting brain state would have on the strategies people use — either sudden insight or methodical searching — to solve problems or anagrams. Ascertaining this tendency would allow the researchers to further clarify whether one’s thinking process is determined by the problem at hand or if more fundamental neural processes exist that influence the inclination to use one strategy over another. Fascinating.

Using electroencephalography (EEG), the researchers recorded the brain’s activity in subjects while solving the anagrams. Immediately after reaching the solution, subjects self reported their problem-solving techniques; insight or methodical searching. The findings regarding insight drew my interest. Highly creative people tend to mind wander, or use diffuse thinking processes, allowing for a broader range of input while solving a problem. Conversely, those who are more methodical tend to focus their attention more narrowly, allowing less input to enter into their thought process. And people using insight tend to make errors of commission at the same rate that methodical thinkers make errors of omission. 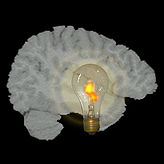 Researchers also found that goal-related thinking (thinking that’s related to solving a specific problem) is not only determined by goals or tasks at hand. Rather, individual differences in one’s resting brain state activity can also influence the thinking strategy employed. Thus it’s possible to conclude that genetics and life experience play a role in how each person’s brain rests and subsequently approaches problem solving.

Check out the picture above. Those subjects who solved the anagrams by employing insight showed a sudden burst of EEG activity in the temporal lobe at the moment the solution became available–the Aha Moment. How cool is it that scientists can map the moment of insight within the brain? (Picture courtesy of Mark Beeman, Cognitive Neuroscience: Insight in the Brain.)

Now enter the tic-tac-toe chicken. While listening to a story on WBEZ’s This American Life, I learned about an attorney, Scharlette Goldman. She defended prisoners on death row, and in one particular case was faced with an impossible situation that called for a chicken. The chicken was enough to pique my interest, but what followed beautifully described the Aha Moment in action.

Here’s what she said to make me stop and listen more intently: “Well, a fluffy, red-combed leghorn deserves his moment in the sun. I mean just the image — and I’m not talking about any chicken. I’m talking about — you can just picture it — this beautiful leghorn, his tail perked up, and that red comb sitting at kind of a rakish angle on his head, and his head kind of cocked to the side, and he looks at you with his little eyes. That’s what this story is about.” Not only was this woman passionate about our feathered friends, she somehow used a chicken to creatively solve a problem she faced with a client.

But what does a chicken have to do with the law?

Scharlette practiced in California and at the time she was defending an inmate whom she believed was legally insane. (He was schizophrenic with an IQ of 58 and very much out of touch with reality.) She had to prove his insanity to the court to save this man’s life because it’s illegal to execute someone who is unable to understand why he is being executed. The state of California didn’t agree with Scharlette’s interpretation of the defendant and had him medically assessed. The psychiatrist testified that she believed the defendant was able to understand his fate because he’d played tic-tac-toe against her and won. Scharlette believed that one’s ability to win at tic-tac-toe did not indicate the ability to appreciate the finer points of execution. But the court agreed with the psychiatrist.

Scharlette had only a short period of time to prove her client was mentally insane. Here’s her Aha Moment: She remembered visiting the fair when she was young and seeing chickens that could play and win at tic-tac-toe. She searched for and found her upstanding chicken to prove that one doesn’t need a high IQ to win at tic-tac-toe.

Sometimes I think the brain is a funny organ. It collects random pieces of information that we don’t know if we’ll ever use and then, Boom! One of these random pieces partners with a current problem we’re trying to solve and we’ve got a tic-tac-toe chicken who could possibly save a man’s life. Our brain simmers in the background and offers a sudden solution we never saw coming.

I bet you’re asking yourselves what the Aha Moment or a clever chicken have to do with the Emergenetics Profile. In 15 years of leadership development, I’m often hard pressed to find open-ended tools for clients – ones that help them think outside the box. I find that leaders are offered pre-determined or prescriptive solutions that end up putting them in boxes. Sometimes these kinds of tools are appropriate; however, they require a type of methodical thinking that can rob us of the valuable creative thought so important to innovation in today’s

workplace. Leaders need to be able to ponder solutions. By doing so, they’ll make better, more innovative decisions for the companies they work for.

Although the Emergenetics Profile has 15 different thinking preference combinations, infinite possibilities for interpretation exist because nobody is the same. When folks take the Profile and use it, they’re immediately intrigued by their Profile. More importantly, the learning doesn’t stop there. As time goes on, they gain awareness of their personal styles and as their brains work on a slow simmer, opportunities for additional awareness pop up at unexpected moments — like how they affect others and how they’re perceived. They start to observe each person’s unique qualities because although we all share the same hard wiring, we differ in our genetic makeup and life experiences. I’ve seen the Profile become the foundation for personal and team Aha Moments, and it’s fun to be part of that process.

What about the chicken? Although it was not allowed its moment in court to play tic-tac-toe, Scharlette won her case. Keep Scharlette and her upstanding chicken in mind when you consider all the creative possibilities you have to offer to the people, teams and organizations you lead. You never know when your “Aha Moment” could save someone’s life — or at least impact it for the better.